We have to get out there and change the old attitudes.”

We have to get out there and change the old attitudes.” “There are only two kinds of people in the world: the disabled, and the yet-to-be-disabled. ~ Ed Roberts

As the day began I thought about what I would want to see within the Cerebral Palsy community altogether for the many years to come which is three simple things: Awareness, acceptance, and understanding, which might not seem like a lot for people but for someone who has lived with Cerebral Palsy for almost 25 years now and has gone on the wildest, craziest most amazing adventure because of my cerebral palsy and because of everything I went through I have a passion for writing using my creative abilities as my way of advocating and expressing myself.

Just like Edward V. Roberts did although he had Apollo he fought to make sure that the newer generation had an example of advocates to look up to when it came to people like me who sometimes feel like the world isn’t truly made for us we have to be those people who make that change so that it could be the world we wanted for the new generation of people with disabilities could it all start with us.

When it comes to advocacy I think we could learn a lot from the people that are around us but we learn a lot from our own voices and what we do in the communities around us to spread awareness about what’s really going in the communities when it comes to the disability community altogether so we can make it happen for the next generation and stick by what Edward V. Roberts did and said about society. 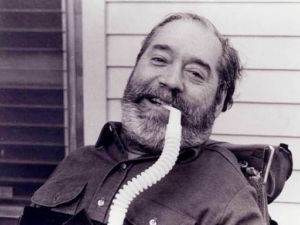