What The Americans with Disabilities Act 30th anniversary means to me

On July 26, 1990, President George H.W Bush officially signed The Americans with Disabilities Act as also known as the ADA which prohibited discrimination against people with disabilities.

Fast forward 30 years later the ADA is still in effect and as someone whose Advocates during the generation of millennials I feel that the ADA’s 30th anniversary means a step forward in the right direction as we are starting to see more awareness when it comes to people with disabilities and more inclusion is available along with more representation when it comes to people with disabilities in being represented well in the Film Industry and television.

But with that being said there is still a lot of work that needs to be done within our society to keep our voices heard as people with disabilities and for the next generation of children and adults, elders with disabilities.

Since we all matter as people who live in a society as people with disabilities and shouldn’t be left behind because we reached a certain age.

As I reflect on all the things I had to advocate for over the years such as having the proper education accessibility in public places and last but not least health care I think of one thing there still a lot of work that needs to be done and we can’t stop advocating now we have to continue fighting for we need in our society and want to bring awareness to.

So with that being said, the ADA means to me the opportunity to speak out about the things that truly bother us as individuals with disabilities and make us have an outlet vs before where we didn’t have much of rights.

Which is what we’re heading towards as Advocates and the next generation of representatives for people with all different types of disabilities. 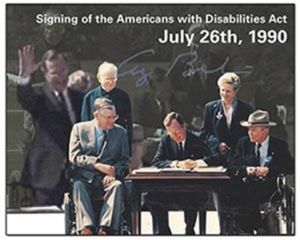